skip to main | skip to sidebar

The whole ‘British Jobs For British Workers’ controversy has come close to home this week: My Mum and Dad, both in their eighties, after many years as activists and local councillors have finally resigned from the Labour Party.

They showed me their letter of resignation. In probably unconscious imitation of Woodrow Wilson – it gave their reasons for leaving in 14 points:

13 of these were very good (albeit almost twenty years too late); the illegal war in Iraq, failure to tackle increasing social inequality, failure to defend education and the health service, failure to reverse Thatcher’s privatisation and anti trade union laws, lack of party democracy and the courting of the City rather than ordinary people. Not exactly a programme for radical change but heart-felt and I can imagine quite an emotional rift for them after years of involvement with the party.

But then there was the shock – one of their points cited Labour’s failure to ‘tackle’ immigration. Basically they took the position of John Crudas.

They live in an area that has not been affected by immigration in recent years, there is a pretty well-integrated community up the road with a significant Sikh population. Despite the occasional verbal clumsiness of their generation (talking about ‘coloured people’) they are not racists.

But I was wrong-footed and my clumsy attempts to put forward a ‘no borders’ counter position didn’t get very far and in fact only provoked some fairly nationalist criticisms of the EU. So it came home to me quite how difficult it is to take these questions up – and also how wrong it is to simply label all those who express these confused views as reactionary bigots.

The controversy over the Lindsey Oil Refinery strike was an example of exactly how this can be skilfully navigated and also something of a litmus test for the Left – with those who prefer to live in sectarian ivory towers (usually in a middle class district) lining up on one side, and socialists who are capable of dealing with the real world on the other.
And so to the news that RMT has put its weight behind a campaign to stand anti-EU Left candidates in the European elections.

Predictably, some have hailed it as a significant step in the breaking away of the trade union movement from the Labour Party, and will intervene in it to build support for a socialist alternative. But others will stand on the sidelines and denounce it as ideologically impure and politically incorrect.

I hope I can intervene similarly in my own family’s split with Labour. I've started by sending my Dad this link.
at Friday, March 20, 2009

Email ThisBlogThis!Share to TwitterShare to FacebookShare to Pinterest
Labels: Politics

Nothing to do with travel. A journeyman was an artisan who had served his time as an apprentice and was so free to sell his labour by the day - or journee. I worked for 25 years in the print and now I am a History teacher. I am a socialist, biker and martial artist. Sometimes I write about these - and other - things. 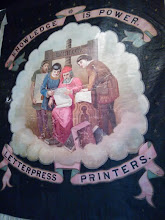